The Professional Perils of Life in the Advertising Industry

The advertising sector is a growing multi-billion euro industry with companies investing huge amounts of time, money and resource into developing effective campaigns to help them achieve growth plans and profit targets.

In turn, the pressure on advertising agencies and other creative partners to deliver campaigns on time and on budget is becoming more critical. But what happens if an advertising campaign doesn’t go to plan?

Consider this. What if a lack of clarity around a social media star’s brand endorsement causes more reputational harm than good? What if an editing issue means that there is a costly reshoot required? Perhaps a celebrity actor is unable to get to a shoot location on time, or a snowstorm means that a power cut leaves a studio out of action on the day filming is due to start?

Mistakes made by advertising agencies and film producers in the advertising industry, whether through negligence or events outside their control, have the potential to damage their customers’ reputation. Mistakes could also cause reputational damage and have serious financial implications for the agencies concerned.

An advertising agency is an idea factory. It creates and plans advertising campaigns for clients to shape and mould their overall brand image using various media channels such as TV, press, poster, radio, experiential marketing or, increasingly, social media including influencers and digital advertising.

Often a creative agency will provide the content, the talent and sometimes the intellectual property to a commercial film producer, who will take responsibility for filming, editing, adding music and all other associated activities needed to create the finished version of an advertisement. These agencies commit to producing creative works on time, to specification and within budget. They also pride themselves on doing this professionally and without errors; however there is always the chance that mistakes can occur, including:

Log in to read the rest of the article in our magazine, The Insider: 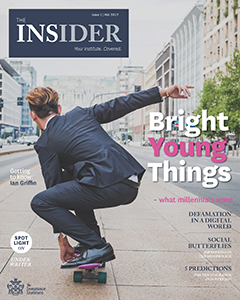