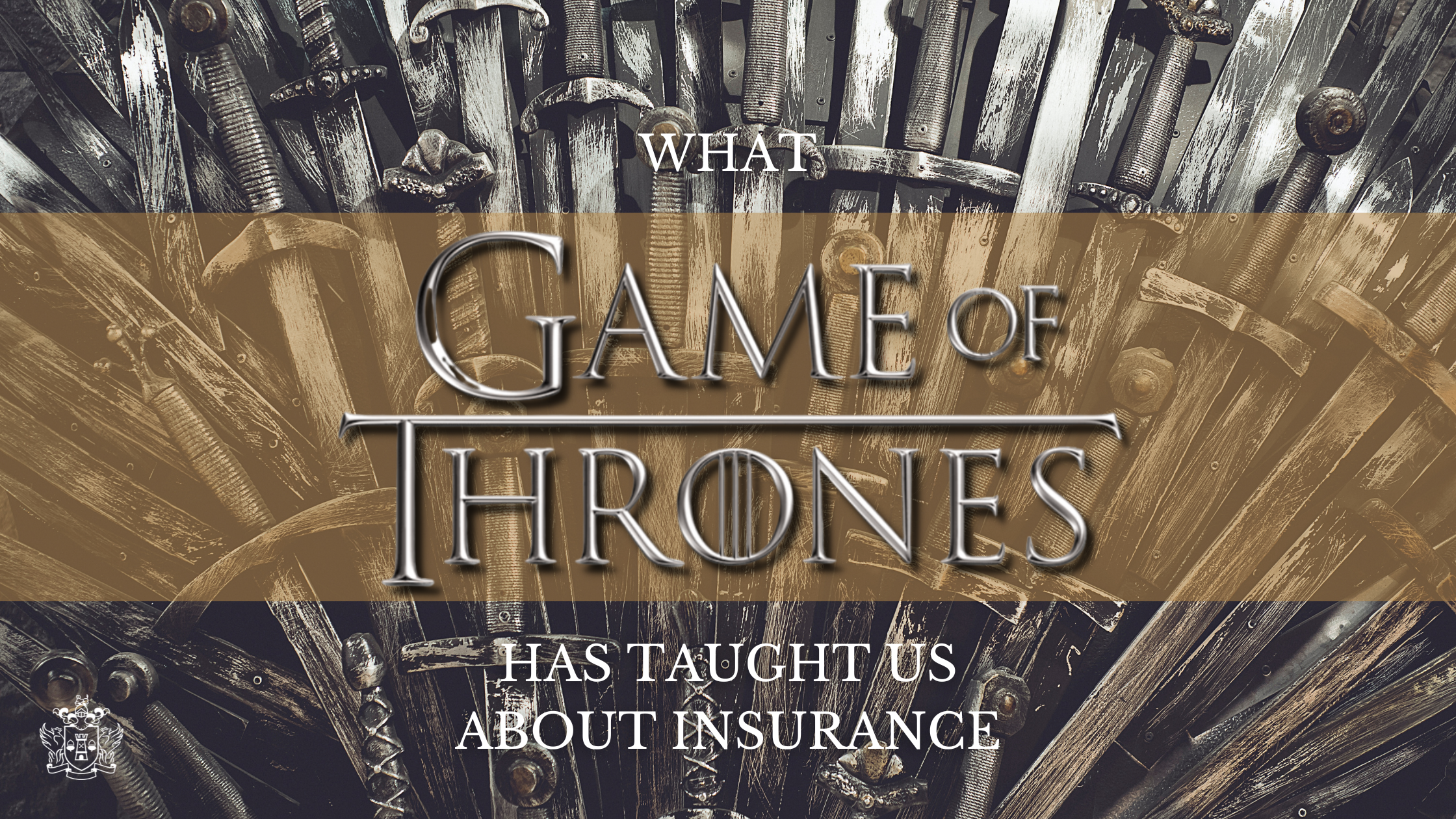 Whether you are a fan or not, you would have to have been living on Mars to have not heard the buzz about the latest Game of Thrones (or GoT to its fans) prequel, House of the Dragon. The new HBO Max fantasy drama launches on August 21, 2022, so we thought we would take a llook at what the original, Game of Thrones series taught us about insurance.

Here at the Institute, we are a little obsessed with Game of Thrones. Maybe because for insurance (nerds) professionals – the series is just so… relatable? Let’s take a look at the insurance themes we identified back in Summer 2019.

From a multitude of missed life insurance payouts to a lost opportunity in seeking events insurance ahead of what became the Red Wedding, Game of Thrones is strewn with characters who could actually work in the industry or could do with considering their insurance options.

Let's start with the legend that is Aidan Gillan as Petyr Baelish. He’s an absolute villain, but if you’re scouring Westeros for someone with financial acumen and insights that resonate with insurers, Petyr Baelish is your only man. Or, he was anyway. Two quotes from the Littlefinger reveal a calculating, keen planner who would likely excel at insurance if he could only keep his wicked side in check!

“What we don’t know is what usually gets us killed.”

Littlefinger knew that in life, just as in insurance, knowledge is power. We need to be on top of every angle – every detail of every policy and how those details apply in evolving contexts to people with particular needs. Not knowing, or not keeping a close eye on the shifting variables and adapting the learning means we fail to put potential policyholders together with the product that they truly need, or we kill off the relationship by not having the answers to their questions and concerns.

“People die at their dinner tables, die in their beds. They die squatting over their chamberpots. Everybody dies, sooner or later. Don’t worry about your death. Worry about your life. Take charge of your life for as long as it lasts.”

Petyr’s advice is worth passing on – as insurance professionals, we understand better than most that life is unpredictable and as such it pays to assess, prepare and make the provisions that put us firmly in charge.

Serious illness cover could have provided some comfort (by way of a lump sum) to Jaime Lannister after he had his best sword-swirling right hook hacked off. The one-time ‘Kingslayer’ was relieved of the limb that was his livelihood in Series Three by his captor, the Bolton soldier Locke. When Jaime tried using his father’s wealth and power as a bargaining chip to secure his release, Locke handed down the harsh lesson – and the loss was so enormous to him that Jaime wished for death.

Of course, Jaime lived and went on to retrain as a swordsman using his left hand – and he got fitted for a (frequently rather loose) metal prosthesis on the right. Perhaps a more conventional medic than the unorthodox Qyburn could have done a better job – and who knows, if Jaime had had decent health insurance (and lived in a more enlightened age and place) his cover might have enabled him to access a bionic prosthetic hand. Plus, if he’d thought about income protection that could have tided him over nicely during the long and difficult days of training by the sea with Ser Bronn.

It seems that Sansa Stark inherited her sweet tooth from her mother. Or that’s certainly what Lysa Arryn suggested when she told the young Winterfell native: “At suppertime, she would go straight for honey cakes, candied almonds, custard. Anything sweet.” Sansa herself is obsessed with lemon cakes – sugar-frosted treats that fit in the palm of the hand and signal the sort of nobility and sophistication that Sansa is always striving for.

Since diving for dessert is in her DNA and there’s no getting away from it, she should definitely consider taking out dental insurance. While it'd be rare enough that you’d see Sansa grinning from ear to ear, it would be well worth it for her to protect her smile and invest in her oral health for the future.

Surely there is no level of cover under the sun that could adequately compensate for the consequences of the fall of the Great Wall of Westeros in the season finale last time out. It seems like irreparable damage – and it places another nearby building – Winterfell Castle and its Great Keep – under almost immediate threat of destruction too. Not to mention the inevitable deaths.

Impact Damage Insurance might have been useful to consider – the vast protective structure was almost asking to be struck. Of course, most existing products refer to impact by cars and other motorised vehicles, rather than by dragons. A huge section of the ice wall was smashed by the undead Viserion, under the control of the Night King and the White Walkers – and what lies ahead is sure to be bloody and chaotic.

Season Seven saw Queen Daenerys and Drogon send the food supply to King’s Landing up in flames. The massive convoy of wagons filled with grains, fruit, vegetables and drinks was incinerated in a flash – and with the Lannister-Tarly supply chain destroyed their people looked set to starve.

Had the joint forces considered Goods In Transit Insurance before setting off from their sacking of Highgarden, the outlook might have been less gloomy since a wide range of risks can be covered. Having said that, war is often excluded. An add-on to much-needed marine insurance – which often covers war, piracy and terrorism – would be worth looking at, and of course there are specific war risk products that could be accessible.

Since their first appearance at the end of Season 1, Drogon, Rhaegal & Viserion have shown themselves to be loyal and invaluable pets for Daenerys. They have been such an asset to the young Targaryen that she would have been well advised to take out full pet insurance cover – particularly as she traversed from Essos to Westeros. Undoubtedly her oversight will have hit home when the undead Viserion emerged from the ruins of the Great Wall and she found herself needing more resources to make up her loss. While lifetime cover would not extend to resurrection, it would have readily compensated Daenerys after Viserion’s death at the hands of the Night King – and she could have been facing into the coming battle with a bolstered army.

Let us know your thoughts in the comments below and if you are interested in starting a career in insurance, head over to www.iii.ie/careers to find out what roles are available.