Brexit: Challenges and opportunities for Ireland

In an article from our member magazine, The Insider, Tobias Müller and Robert Joniec of Müller Consultancy, give insights on what the Irish insurance market can expect following Brexit and how organisations can best prepare.

By 14 July 2017, the financial firms domiciled in the United Kingdom were to provide their Brexit plan of action to the Bank of England, with a requirement to consider all possible outcomes. The increasingly complex and opaque economic and political environment makes it even more difficult for European insurance companies to determine their midterm strategic planning.

Market places such as Dublin, which may serve as an alternative home for British insurers, also must account for the possible implications that Brexit may have in store for them. This article discusses two possible structural changes following Brexit that will impact the insurance industry within the European Economic Area (EEA) and – given the cultural, geographical and linguistic proximity to the UK – in particular within Ireland.

At the annual meeting of the German Association for Insurance Sciences held in Berlin in March 2017, Gabriel Bernardino, Chairman of EIOPA, underlined his intention to align regulation in all 27 European member states, in order to diminish regulatory arbitrage within the EEA. Together with last year’s implementation of the Solvency II Directive and the more recent invocation of Article 50 by Theresa May, it is necessary to review reinsurance strategies and their exits.

The exact day of Britain leaving the EU, and the terms under which this will occur, remain highly uncertain. The implications for reinsurance relationships between Irish (re)insurers and British reinsurers, however, allow for two possible scenarios. In the first scenario, UK regulation obtains the status of ‘equivalence’ (or some kind of equivalence) from the European Commission before leaving the EU. In the second scenario, it does not. Equivalence builds on Article 172 (3) of the Solvency II Directive, which provides that:

“Where in accordance with paragraph 2 the solvency regime of a third country has been deemed to be equivalent to that laid down in this Directive, reinsurance contracts concluded with undertakings having their head office in that third country shall be treated in the same manner as reinsurance contracts concluded with undertakings authorised in accordance with this Directive.”

Thus, as long as their domiciles national supervision is branded ‘equivalent’, reinsurance coverage from foreign reinsurer’s accounts for full risk mitigation under the SCR calculation – that is irrespective of whether or not they have to get licensed in an EU member state before writing reinsurance business in any market of the EEA. But when the UK turns into a foreign and non-equivalent jurisdiction, solvency relief may no longer be fully effected by the coverage offered by reinsurers domiciled in the UK.

Ultimately, it is the European countries who decide individually on how to implement the Solvency II Directive. Germany and Poland, for example, require a non-EEA reinsurer to either originate from an equivalent supervisory regime or to establish a local branch office. Other than that, only reinsurance by correspondence is accepted. Ireland and the UK, however, do currently allow for full credit from non-EEA reinsurers.

Although Britain was a member state on 1st January 2016 and therefore currently complies with Solvency II, it could be forced to formally apply for equivalence the moment it leaves the EU. How long it will take the European Commission to decide on the issue of equivalence remains uncertain. While not directly linked to Brexit, the USA – a currently non-equivalent third country – has in January 2017 reached agreement with the EU to be considered equivalent, however this so-called Covered Agreement is yet to be ratified by the respective parliaments.

What does this mean?

For the sake of their risk management, Irish purchasers of reinsurance coverage should have a plan in store for the possibility of Britain – or the USA – being treated as a non-equivalent third country while at the same time the Irish supervisor decides to change its regulation on credit given for reinsurance from non-EEA reinsurers. Ceded reinsurance managers need to stay proactive and flexible at the same time. Within their risk and reinsurance strategies, senior management needs to take into account their companies’ exposure to political decisions. Last but not least, writers of active reinsurance business domiciled in Ireland should pay close attention to possible openings arising among European buyers. 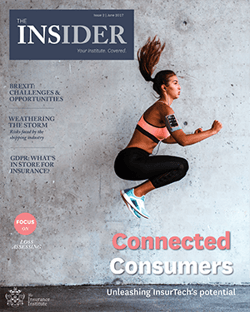